It was a back-and-forth battle at the top for most of the day Saturday, between pros Jacob Wheeler of Harrison, and Zack Birge of Blanchard, Ok. 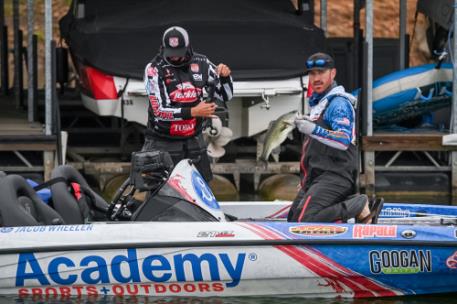 It was a back-and-forth battle at the top for most of the day Saturday, between pros Jacob Wheeler of Harrison, and Zack Birge of Blanchard, Ok., at the Major League Fishing (MLF) Bass Pro Tour Berkley Stage Two at Lake Travis Presented by Mercury event in Austin, Texas.

The duo traded the lead back and forth for most of Period 2, however Wheeler boated a 4-pounder right near the end of the Period, then added another 4-pounder shortly after the start of Period 3 to increase his lead to just over 10 pounds.

Lightning in the area forced tournament officials to institute a weather-delay at 1:35 p.m. as the 40 anglers on the water stopped fishing and took shelter. After a two-hour delay, and with no end in sight, officials called the day and competition was over. It was the first time in MLF Bass Pro Tour history that competitors did not complete three full periods and was also the shortest day of competition in history.

The 40 anglers in Group B will have the day off on Sunday, while the 40 anglers in Group A will complete their two-day Qualifying Round of competition. Group B will conclude their Qualifying Round on Monday. The six-day event, hosted by the Austin Sports Commission, features 80 of the top professional anglers from around the world competing for a purse of $805,000, including a top cash prize of $100,000 to the winner.

“I had a tough practice and never really got dialed in, so I didn’t know what was going to go down this morning,” Mr. Wheeler said. “To have it all come together, it ended up being a really awesome day. I’m super blessed to be in the position that I am in, but I’m definitely going to have to catch them again on Monday.”

Mr. Wheeler said that he caught his fish on two different patterns.

“I don’t want to get too specific since we’ve still got a ways to go, but basically it came down to two different things for me – spending time on the bank with a topwater bait and catching fish around boat docks,” Mr. Wheeler said. “It seemed today like every dock had multiple fish on it. It’s just whether they were the right quality. This lake is full of ¾- to 1-pounders, but it’s not that easy to generate the bigger bites. I was fortunate to get into a little stretch today and catch a couple of the right ones.”

For Mr. Birge, he did all of his damage on just one bait, although he also was not ready to divulge specifics, yet.

“I actually started in a place I wasn’t planning on fishing,” Mr. Birge said. “I went in there to look for some schoolers because it wasn’t windy, but the schooling fish never showed up so I just went to the bank and started fishing what looked good and I ended up catching a bunch of fish.

“I caught everything on just one bait, but I didn’t really try anything else because they were biting it so good,” Mr. Birge said.

Mr. Birge did not mention his exact bait but did offer clues that he was running steep banks with an Omega Custom Tackle lure. His setup included a 7-foot, 3-inch Favorite Fishing Rush Casting rod and he threw his bait on 12-pound Yo-Zuri T7 fluorocarbon line.

A complete list of results can be found at  MajorLeagueFishing.com.

Overall, there were 236 bass weighing 514 pounds, 4 ounces caught by the 40 pros on Saturday, which included one 8-pounder, one 6-pounder and two 5-pounders caught from Lake Travis.

Mr. Shryock won Saturday’s $1,000 Berkley Big Bass Award, weighing in an 8-pound, 4-ounce largemouth on a jig during Period 1. Berkley will award $1,000 to the angler that weighs the biggest bass each day, and a $3,000 bonus to the angler who weighs the largest bass of the tournament.

The 40 Anglers in Group A compete in their two-day qualifying round on Friday and Sunday – the 40 anglers in Group B on Saturday and Monday. After each two-day qualifying round is complete, the anglers that finish in 2nd through 20th place from both groups advance to Tuesday’s Knockout Round, while the the winner of each group advances directly to Wednesday’s Championship Round. In the Knockout Round, weights are zeroed and the remaining 38 anglers compete to finish in the top 8 to advance to the Championship Round. In the final day Championship Round, weights are zeroed and the highest one-day total wins. Full breakdown of the format can be found at MajorLeagueFishing.com.

Anglers will take off at 6:30 a.m. CT each day of competition from Mansfield Dam Park, located at 4370 Mansfield Dam Park Road in Austin. The General Tire Takeout will also be held at the park daily beginning at 3 p.m.

As part of the event, fans will also be treated to the  Hill Country Hangout at Bass Pro Shops in Round Rock, Texas, on Sunday from 11 a.m. to 4 p.m. The free event includes the opportunity to interact with Bass Pro Tour anglers, enjoy activities and special fan-only giveaways provided by MLF sponsors, and learn more about the sport of fishing and other outdoor activities in fishing seminars. All activities are free and open to the public. For more information on the Hill Country Hangout hosted by Bass Pro Shops, visit  MajorLeagueFishing.com.

The Bass Pro Tour features a field of 76 of the top professional anglers in the world – joined at each event by 4 pros that qualify from the Tackle Warehouse Pro Circuit – competing across seven regular-season tournaments around the country, competing for millions of dollars and valuable points to qualify for the annual Heavy Hitters all-star event and the REDCREST 2022 championship.

The MLF NOW! broadcast team of Chad McKee, Marty Stone and J.T. Kenney will break down the extended action on all six days of competition from 6:45 a.m. to 3:30 p.m. CT. MLF NOW! will be live streamed on MajorLeagueFishing.com and the MyOutdoorTV (MOTV) app.

Television coverage of the Bass Pro Tour Berkley Stage Two at Lake Travis Presented by Mercury will be showcased across two two-hour episodes, premiering at 7 a.m. ET, Sept. 11 on the Discovery Channel. New MLF episodes premiere each Saturday morning on the Discovery Channel, with additional re-airings on the Outdoor Channel and the Sportsman Channel. Each two-hour long reality-based episode goes in-depth to break down each day of competition. 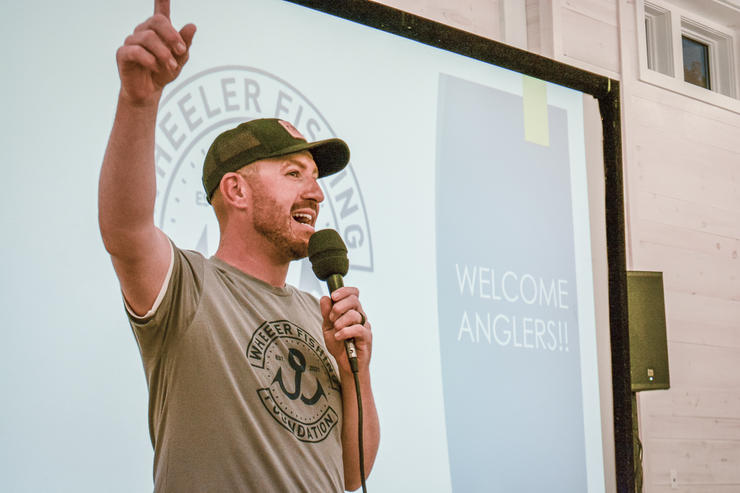